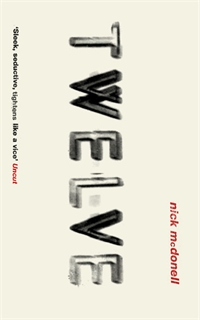 Nick McDonell's electrifying novel tells the story of a fictional drug called Twelve and its devastating effects on the beautiful rich and desperate poor of New York City. A bleak Manhattan midwinter and a group of wealthy teenagers, left to their own devices by disregarding parents, delve into the excesses of drugs, sex and the most chilling acts of violence imaginable. Hunter ----- falsely accused of murder after a fight on the basketball courts; White Mike - a straight-A student who makes a fortune selling illegal substances; Jessica - gorgeous but obsessed with a fabulous new designer drug called 'twelve'; and Claude - whose trips into the shadier corners of Chinatown have fuelled a macabre fascination with deadly weapons...From page one, this novel pulsates towards its apocalyptic climax. Cool and cruel and utterly compulsive, TWELVE is the debut novel of 2002.

I recently saw the movie trailer for this, and it looked really good, so I looked it up on GoodReads, but the reviews were very mixed, some hated the book, some loved it.
I for one really enjoyed it, the writing style was different and cool, it was an extremely quick and easy read that I really couldn't put down.
I have to say I was disappointed with the ending. I thought it ended abruptly and was kind of a cop-out. I'm not going to ruin it with a spoiler; but I will say that, although you knew Claude was a freak, you really didn't get into his mind enough during the story to understand why he did what he did at the end.

Then I remember again, this was written by a 17-year old, and well, he did everything a standard novel writer should do, so you can't really fault him for the ending that was built up well enough on the surface. I did get the sense that the author just learned many of these characteristics of a "good novel" in school, though, and thus his honing of the craft was a little to fresh. He could use some more practice to provide greater depth to some of his characters and to the story as a whole. I do look forward to reading his future work, maybe something he writes in another 5 years.
Overall, I think that this would be a good book to check out from the library if you are looking for a more adult (It is a very adult book with mature content), darker read.
Cover:

at 12:51 PM
Labels: 4 stars, review
Email ThisBlogThis!Share to TwitterShare to FacebookShare to Pinterest