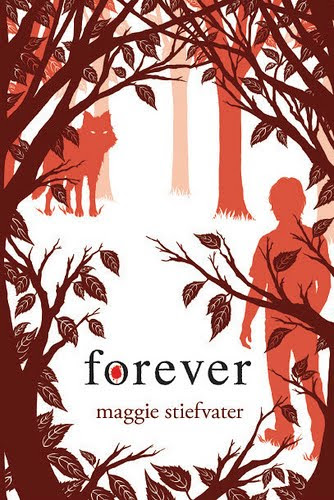 *** Spoilers from the first two books Shiver and Linger ***

The thrilling conclusion to #1 bestselling Shiver trilogy from Maggie Stiefvater

When Sam met Grace, he was a wolf and she was a girl. Eventually he found a way to become a boy, and their love moved from a curious distance to the intense closeness of shared lives.

That should have been the end of their story. But Grace was not meant to stay human. Now she is the wolf. And the wolves of Mercy Falls are about to be killed in one final, spectacular hunt.

Sam would do anything for Grace. But can one boy and one love really change a hostile, predatory world? The past, the present, and the future are about to collide in one pure moment - a moment of death or life, farewell or forever.

I'm really conflicted on this one guys.

I think I liked this book the least out of the series, because I'm a pretty die hard Cole fan, but he wasn't introduced until Linger, so part of me thinks that if I reread Shiver than that would be my least favourite... but I don't know.

My crazy alter ego Shelby is in this book. Which is exciting because you never know what psychotic thing she'll do next, and there's just something really exciting when your name is in a book you read!

So, basically everyone in this book starts out really depressed. Sam can't seem to function without Grace, Cole is working trying to find a cure for the wolves. But somehow it was still really boring to me. I don't know why, because almost every review on GoodReads loved it, I don't know why I just didn't really.

I think it might be because I don't really like Sam and Grace, at least as much as I like Cole and Isabel, and the story (at least the relationship part) was about them.

Other than that, I think the plot was good and the writing was good, even though there were a few slow parts.

If you’ve read the rest of the series, you will probably read this one no matter what I say about it, and I would encourage you to do so anyway due to the overwhelming response of people who loved it.

as always I ask you to leave a comment below with your opinion, and possibly a link you your review.

at 5:33 PM
Labels: 4 stars, review
Email ThisBlogThis!Share to TwitterShare to FacebookShare to Pinterest