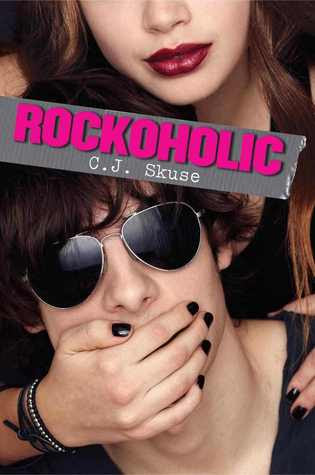 
She's got it bad, and he ain't good -- he's in her garage?"I'm your biggest fan, I'll follow you until you love me..." Gonna have to face it: Jody's addicted to Jackson Gatlin, frontman of The Regulators, and after her best bud Mac scores tickets, she's front and center at his sold-out concert. But when she gets mashed in the moshpit and bodysurfs backstage, she's got more than a mild concussion to deal with. By the next morning, the strung-out rock star is coming down in her garage. Jody -- oops -- kind of kidnapped him. By accident. With a Curly Wurly candy bar. And now he doesn't want to leave. It's a rock-star abduction worthy of an MTV reality series...but who got punk'd?!

If you know much about me, you know that I am pretty obsessed with music. I don't really have a favourite genre but realistically the majority of my iTunes library is rock music. It's pretty sad that when I saw this book at B&N I thought that this was something that could happen to me.

Rockoholic starts out with a girl names Jody who is pretty crazy obsessed with this band guy named Jackson Gatlin who is the lead singer of a band called the Regulators. Now I get obsessed, I recently few to Canada to see my favourite band play, but I was a little concerned for Josie's wellbeing, I spent the first few chapters thinking that she really needed a hobby other than the Regulators. But as the book went on I started to identify with her and understand her obsession (not enough where I would kidnap a band member let's be clear about that), but it made me think about myself and my heros and how amazing it would be to talk to them for longer than they give you in a meet and greet line.

When I bought this I was expecting a fluff read but this book actually has a lot of substance to it, Jody is sarcastic and funny, but also a very kind person. She was still mourning the loss of her granddad, who she loved a lot, and so was understandably very confused sometimes, and didn’t know what to do, or which path in life was right for her. I felt a little sorry for her because Jody always felt like she could never compare to her sister Halley, who was the “golden child” of the family. Jackson was much the same; as a jaded rockstar who’d fallen from the pedestal everyone put him on, he too was confused about what he should do with his life. But both Jody and Jackson changed a lot in this book, and they overcame a lot of problems together (it’s amazing how this novel could be so hilarious and yet quite moving at the same time). By the end of the story, Jody was no longer the immature fangirl she used to be, and I grew to love her even more. Jackson was also no longer an unhappy, spoilt brat, and I think being with Jody and Mac helped him so much – he even started playing with Cree, Mac’s little sister, which was a huge change for him. He was actually a lot wiser than I first expected him to be, and was able to help Jody with a few of her problem as well as finally sorting out his own. Even Mac worked up to courage to change a few things in his life, and I have to say, Mac was one of my favourite characters. He was quirky, funny, and very lovable  and was always willing to help Jody, even when it was with something as crazy as looking after a kidnapped celebrity – he truly was the best friend a girl could have.

The ending of Rockoholic was just perfect in my opinion, and though everything was wrapped up, I was really sad to see these characters go. I had grown really attached to Jody, Jackson and Mac – they were all people I could relate to in some way, and I think I’m really gonna miss them.

Overall, I loved Rockholic – it was a fun, light, wonderful book with a heart-warming underlying message, and I highly recommend it to anyone looking for a good summer read, or for anyone who just feels like laughing their head off.

at 8:30 AM 128 comments
Labels: 4 stars, review
Email ThisBlogThis!Share to TwitterShare to FacebookShare to Pinterest

Review: The Fault in Our Stars by John Green 
Diagnosed with Stage IV thyroid cancer at 13, Hazel was prepared to die until, at 14, a medical miracle shrunk the tumours in her lungs... for now.
Two years post-miracle, sixteen-year-old Hazel is post-everything else, too; post-high school, post-friends and post-normalcy. And even though she could live for a long time (whatever that means), Hazel lives tethered to an oxygen tank, the tumours tenuously kept at bay with a constant chemical assault.
Enter Augustus Waters. A match made at cancer kid support group, Augustus is gorgeous, in remission, and shockingly to her, interested in Hazel. Being with Augustus is both an unexpected destination and a long-needed journey, pushing Hazel to re-examine how sickness and health, life and death, will define her and the legacy that everyone leaves behind.

I recently reread John Green's The Fault in Our Stars and realized I never did a review of it and I thought, what a great way to ring in the new year!

If you haven't read a John Green book yet, drop the computer/phone/whatever you are reading this blog post on and go buy one. Like right now. The Fault in Our Stars has worked it's way to the top of many bestseller lists and in every way deserves all the praise it's gotten, my review can't encompass the impact this novel has had on me and no matter how much praise I give it, it will not be enough.

The characters of Augustus Waters and Hazel Grace Lancaster are not only beautifully written, but they are also very raw and human. These characters are very similar to me and my friends and throughout reading I posted a multitude of pictures on my blog in effort to back up that Augustus Waters and I are the same person. The way John Green has written this story you forget that these kids are any different from you because they aren't which makes the ending of this story even more heartbreaking.

I don't think I can give Green enough praise in this review except to say if you are at all on the fence about reading The Fault in Our Stars, please read it, it's worth it I promise.

I'm sorry for the short review but I guess I don't have any more to add.

READ THE BOOK (keep a box of Kleenex handy)